Okay, so there was no boat and no shore. But I still rowed this morning.

It’s supposed to rain this weekend in Southern California, which makes us natives want to cocoon and get all cozy—unlike our East Coast brethren who, at the prediction of more precipitation, are probably ready to book a flight out. Going anywhere.

Rainy mornings make me want to knit, bake, and drink hot tea. Too bad I don’t have a rocking chair—and hair long enough to stick in a bun, like that old lady in the Tweety Bird cartoons. I even set out butter to soften for a new recipe* from Pinterest.*

There were just two flaws in my plan.

One, it wasn’t raining this morning.

So I pushed aside my fantasy of remembering where I’d put my circular knitting needles and drinking hot tea—I actually don’t like tea and would much rather have a Diet Coke anyway. The butter, however, was still softening.

The morning wasn’t entirely a bust, because I rowed my little heart out—and I mean exactly that. During a 500-meter sprint, I felt like I might have a heart attack (it’s not like I’ve ever had one for comparison—I just knew). On the bright side, it gave me something to think about as I rowed. Usually I spend the entire sprint with my eyes glued on the meter timer, simultaneously swearing at it for being broken and at the studio’s owner for shoddy equipment maintenance. And this morning what I thought about was how far away the fire station was, and how fast could they get there. 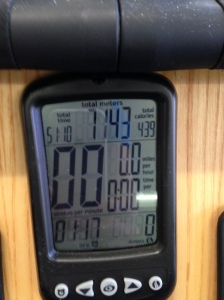 That’s the problem with being the oldest in a class of four—I will not be beat. Not by some 35-year-old punks, and not by my own traitor of a heart. So I sprinted those 500 meters and beat my last time by eight seconds. Eight seconds may not sound like a lot, but try this: grab hold of two objects equaling a thousand times your body weight then push them and pull them as fast as you can for two minutes. Puts mere seconds into prospective, doesn’t it? And maybe rowing isn’t equal to a thousand times your body weight, but still…

The rain is supposed to come later this afternoon. I still haven’t found those circular needles, and I still don’t like tea, and I put the butter back in the ‘frige because, well… Just because. But if we need to row out of a deluge, I’m ready.